Speech of Her Majesty Margareta of Romania in Warsaw 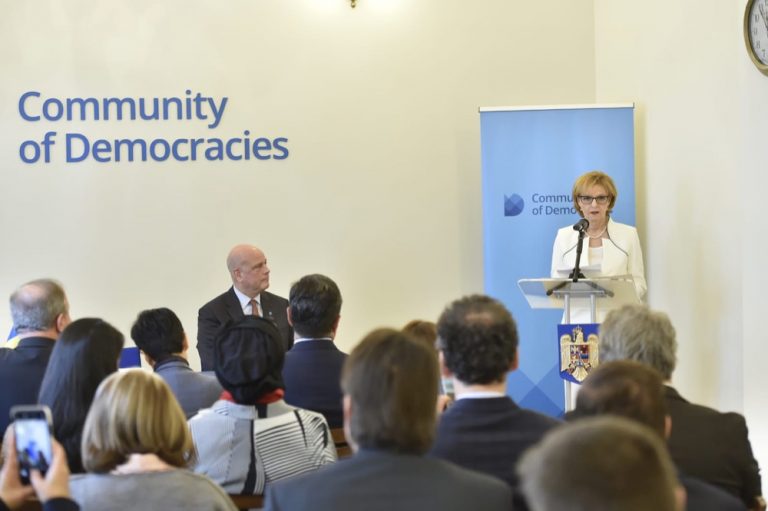 The speech of Her Majesty Margareta of Romania at the headquarters of the Community of Democracies, Warsaw, 5 March 2020

Your Excellencies, Ladies and Gentlemen,

It is an honour to address you today as a Romanian, as a representative of the country which currently holds the Presidency of the Community of Democracies.

It may sound strange that the Warsaw Declaration of June 2000 which acts as the foundation document of our Community was actually concluded roughly one decade after the fall of communism, and at a time when we were told that we were experiencing the so-called “end of history”, a period during which, by all accounts, we no longer needed to be concerned about the battle of ideas, since our democracies and our way of life had, supposedly, triumphed forever.

Yet US Secretary of State Madeleine Albright and the much lamented Bronislaw Geremek, the Polish Foreign Minister at that time, still considered it essential that we should sign a common pledge to defend our democratic values. They were right, because democracy is not something like the old communist Five-Year Plan which one fulfils or at least pretends to fulfil. Democracy is a way of life, a political framework which needs to be constantly nurtured, perfected and protected. Those who drafted the Warsaw Declaration almost exactly two decades ago suspected that values which were then considered to be fully accepted world-wide not only needed to be constantly reiterated, but had to be explained all over again, and repeatedly.

Today, we can only bow to the wisdom of the drafters of this declaration. Because, far from being triumphant, our democratic values are under attack from political systems which offer themselves as alternatives to our set of values, and often present themselves as superior to our system.

All I can say is that I am proud that my country now holds the Presidency, and I remain convinced that we are both ready and capable to share our experience with other countries in the process of transitioning to democracy or in trying to strengthen their existing democratic institutions and practices. I would like to reassure all of you of the continuation of Romania’s commitment to promoting democracy, stability and development in the world, as the current Presidency of this forum. And I hope that, as Secretary General Garrett discussed in Bucharest recently, Romania will work towards the goal of promoting the Community of Democracies into a more comprehensive international organisation, one with broader and stronger institutions, capable of enhancing even further its principles of good governance.

Your Excellencies, Ladies and Gentlemen,

Madeleine Albright, one of the prime movers behind this Community, also achieved another “first”: she was the first female head of America’s diplomacy, a trailblazer for her gender. So, let us turn now to the question of women and leadership.

We are marking just over a century since women were first allowed to vote in national elections in Europe. To be sure, not all of us advanced at the same speed: I have to admit that Poland, for instance, was quite far ahead of my country, when it came to granting voting rights to women. And some European countries – such as Ireland, Britain, Luxembourg or the Netherlands – not only had women MPs a century ago, but also in one case a woman minister.

Since those days, the share of women in decision-making posts has been growing. Yet women are still under-represented in European national and local politics. Women, for instance, account for an average of only 30 percent of deputies in EU national parliaments, and in my own country, sadly, it is even a bit less than that. Many of us are yet to catch up with the performance of Spain, Sweden, France or Finland, where women are now approaching half the number of deputies in national parliaments.

The share of women members of government in the EU has also risen to an average of 30 percent last year, up from around 23 percent two decades ago. But, again, these figures hide some very serious shortfalls in some EU countries, where the number of women in cabinets is still very low. True, both Poland and Romania have already had women as heads of governments. But even in progressive governments, the fact remains that men are still more likely to be assigned high-profile ministries, while women tend to get the so-called socio-cultural or health portfolios.

Nor is the picture any clearer at the European Union level. Looking at the current European Parliament, 11 out of 28 EU states had electoral gender quotas in the past elections. But only six of the 27 EU member-states today succeeded in sending a gender-balanced group of MPs to the EU parliament and, sadly, neither Poland nor my own country are in this group.

So, although we have made progress, at the current snail’s pace it may take a further century, according to the Global Gender Gap Report 2020, for women to become truly equal to men in Europe, despite the fact that throughout its history, the EU has been a global leader in advancing women’s rights. And what is more worrying still is the fact that, while some gaps are being closed, other gaps are opening. In many areas, including pay and especially pensions, progress towards equality of genders has either stalled, or actually gone into reverse.

Imbalances between women and men in leadership positions are observed in different fields: politics to which I already referred, but also economics, science engineering, mathematics, technology and research. The situation is even worse in terms of business management, since women are far fewer than men at all levels of management. Of all entrepreneurs, just 31 percent are women. Due to gender stereotypes, women are still much less likely to get jobs in science, technology, engineering, or mathematics, or find a job in growing and better-paid areas of employment requiring information and communication technology skills.

Don’t get me wrong: some achievements are real. Many of you here today are proof of that. According to the studies conducted in the most industrialised countries, almost 75 percent of major companies now have at least one woman in a top management or executive position. However, it is interesting to point out that this progress is mainly happening in emerging economies, rather than the old mature Western economies. In African countries, no less than 90 percent of commercial companies have at least one woman among their managers and in central Europe, our region, 87 percent of companies have women in managerial roles, a much higher figure than the western part of Europe or in North America. What the figure shows, perhaps, is that newly developed economies are more willing to ignore old prejudices, while old prejudices and barriers to the promotion of women remain in the more mature and well-established developed economies.

Despite encouraging developments, women are still undervalued in leadership positions. One factor preventing women from accessing management structures is what is known as the “pierced pipe” phenomenon, in other words the tendency to see the proportion of women decrease as one moves up the hierarchy. And then, of course, there is the “glass ceiling”, the fact that capable women high up the managerial ladder tend to hit this invisible barrier and get stuck in leadership positions in areas such as human resources, finance and administration, considered less strategic, or face other informal difficulties in sitting on the board of directors, or moving to the top.

Yes, we all know that there are many reasons for this unsatisfactory state of affairs, including traditions, religious beliefs, family structures and economic considerations. But what I would like to highlight today are the trends going in the opposite direction and pushing towards greater gender equality and women empowerment.

The first is technological change. It is now not only possible but actually desirable for work to be managed more flexibly. So, one of the key obstacles to women promotion in workplaces – a woman’s perceived duty to raise and look after a family – can be much more easily blended with uninterrupted work. Today, digitalization and the organization of companies requires more collaborative management, rather than the “silos” approach of the past. Women are in fact particularly comfortable in these environments, so the binary choice between home and work is no longer such a fundamental one. Family life and public life can be combined, or at least careers need not be sacrificed for those women who don’t wish to do so. But it is still a struggle for countless women.

The second reason to be optimistic about women’s leadership and empowerment is that an ageing population really needs a greater gender integration. We are, after all, talking about half of the population of the EU – yet only two thirds of women are in full-time employment. We must step up our efforts and make gender equality an overarching stand-alone goal and link it to all our policies, at every level. Only in this way are we likely to succeed in the objectives we hold dear: inclusive and prosperous societies.

Gender equality is not only a moral issue, but a fundamental human right. Every aspect of our lives depends on it, be it by allowing more women to become economically active on equal conditions to men, creating better environment for family members to share the load, or simply by reducing the psychological burden from the primary earners in the households. And let us not forget the economic factor of gender equality: the world loses an estimated 140 trillion Euro in wealth because of the fact that women don’t participate fully in the labour market and are not equally paid to men. The gender pay gap persists in all countries and across all sectors.

I am satisfied to say that what I am arguing for today is no longer exceptional, but the norm. Latest opinion surveys indicate that no less than 90 percent of Europeans (both women and men) think that gender equality is crucial for a fair, democratic and peaceful society, for the economy and for them personally. So, this is not merely a desirable objective, but an essential one.

Moreover, in just two years since 2016, the share of EU citizens who would like the EU to intervene more in this policy area has risen by 10 percent (from 55 percent to 65 percent). In short, not only do our people believe that a fair and just society requires gender equality and can benefit from women’s leadership, but our people also support active measures to bring this about.

I, for one, intend to continue to make it one of my key priorities. And I am sure that you will join me in this objective. For that, to me, is what a Community of Democracies should be about.

Performance cookies are used to understand and analyze the key performance indexes of the website which helps in delivering a better user experience for the visitors.

Analytical cookies are used to understand how visitors interact with the website. These cookies help provide information on metrics the number of visitors, bounce rate, traffic source, etc.

Advertisement cookies are used to provide visitors with relevant ads and marketing campaigns. These cookies track visitors across websites and collect information to provide customized ads.

Other uncategorized cookies are those that are being analyzed and have not been classified into a category as yet.